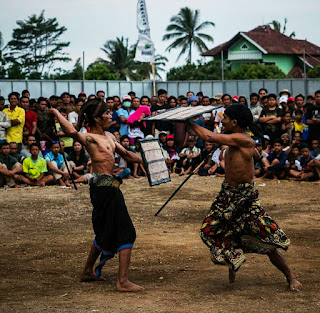 Bau nyale festival is an annual festival that held on the middle of February or March, in Seger, Mandalika, Central Lombok. This festival held to celebrate the history of Mandalika princess who thrown herself away aimed to save the world from the war, and then turned into sea worms that are called Nyale.

Pesona Tambora festival is held in Sumbawa island, West Nusa Tenggara. This festival is aimed to celebrate the history of the explosion of Tambora Mountain on April 11, 1815.

Pesona Tambora festival is not only celebrated in Sumbawa, but also in Bima City which is called Lawata Festival; Teka Tambora in Bima Regency which consists of hiking activities; and Tambora challenge which consists of ultra-marathon.

Iron man 70.3 Lombok is the thriatlon competition that will be held on July 3, 2021. This event will be managed by Indonesia Sports and Event Management (ISM) as the local organizer. However, they will be firstly guided by the owner of IRONMAN, World Triathlon Corporation (WTC).

Bulan pesona Lombok-Sumbawa will be held a month fully started from August to September. This event also consists:
a. Mataram Carnival, which is held in Mataram City
b. Pekan Pesona Gumi Selaparang in East Lombok
c. Senggigi Festival, in West Lombok
d. Gili Tramena (Trawangan, Meno, Air) Festival in North Lombok, and
e. Festival Moyo which is held in Sumbawa Regency
6. L'ETAPE (September 2021)
L'ETAPE is an international bicycle competition. It is a part of Tour de France. This event also will be held approximately in the end of September to early October, and will be followed by MotoGP.

MotoGP Mandalika which will be held in Kuta Mandalika, Central Lombok is officially included into the calendar of events in 2021. This international event also becomes one of the main agendas in West Nusa Tenggara.

The Government also positively confirmed that MotoGP Mandalika will certainly be held in October. As Moh Faozal as the head of tourism office in West Nusa Tenggara claimed that the event will be held as the time scheduled. The government also keep building the supporting infrastructures such as the road, harbour, telecommunication, and the readiness of the villages around the circuit.

Taliwang festival is an event held in West Sumbawa, in November 20, 2021. This event consists 'Berapan Kebo' or buffalo racing in muddy field; as well as the exploration of nature and culinary of West Sumbawa.

Accommodation expo and Tenun Lombok Sumbawa festival is the closing agenda of calendar of events in 2021. This event usually consists of traditional dance and music performance, the exposition of accommodation where people can get lots of insight about tourism industry, fashion show of traditional waving clothes, culinary exposition and many other else.

Those events above will be held by implementing the covid-19 protocols. As the regional secretary of West Nusa Tenggara Province Drs. H. Lalu Gita Ariadi, M.Si., states, the main point is to control the covid-19 spread. Therefore, the socialization, the location's preparation, and the application of CHSE (Cleanliness, Health, Safety & Environment Sustainability) in every location are crucially needed since they affect the tourists' interest.

"I hope this calendar of events in 2021 becomes the tourists' references as well as be one of our promotions," he added.