A sacred ritual of ‘picking up the dead soul’ within Menyoyang tradition in North Lombok, Indonesia 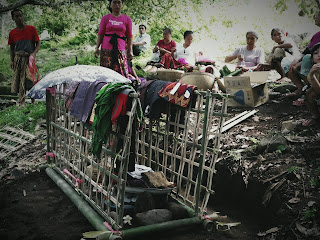 In the former of time, most of people celebrate Menyoyang after  the 1000 days of the death. However, as the time goes by, this tradition can be done in two weeks after the death or more. And since it is the final occasion, it should be the biggest event and sometimes cost much.

Basically the stages and the provisions of Menyoyang are the same in all religions. However, in Buddhist, there is one sacred ritual done within the tradition called "Ngalu melekat" or picking up the dead soul to involve in this final ritual. This ritual only can be done after several stages, starting from Gegantungan’s day or placing the earth’s crops into Ringgak- a place made from woven bamboo- in the gazebo which is done in the evening. After this  procession, there should be done roah or prayers. During this procession as well, there should be done a procession called Melolongin or preparing the complete clothes aimed for the dead soul that should be brought in the next morning.

“During the procession of picking up the dead soul, a roah or prayer is also performed. And the dead soul itself is picked up from the grave to berugak kekelat, or the place in where this Menyoyang ritual is done.” Said he, yesterday.

After the ritual of picking up the dead soul is done,  the peak of the event called Pelepasan- is also  held. Pelepasan aimed to let the soul go in sincere and pray for their peace. This procession also consists of donating the necessities of life of the deceased who have died; including the crops, clothes, and other needs.  And then the occasion proceeded by the final one held on the third day, which is called "Ngatong melekat" or delivering the dead soul back to his or her grave.

“So every procession needs roah or prayers, and the things needed are the same. Foods and beverages must be provided.” He added.