A heaven under the sea of West Lombok, Indonesia 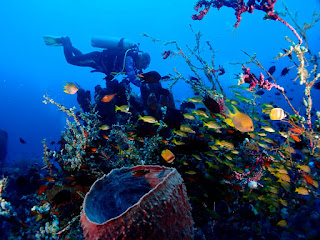 The life under the sea sometimes becomes a mystery and it never seems to stop surprising humans who live on its surface. It is always shrouded in silence and contains many untold stories. These things are what make most of divers are in wonder; hence always want to find out and explore more about the ocean.

One of the best place to explore the underwater world is West Lombok Regency. This regency has become one of the best choices for domestic and foreign divers to figure out the underwater beauties. Moreover, along the part of the ocean in West Lombok provides great diving spots, one of which is located at the southern tip of the West Lombok region, namely Sekotong District. This region has always been known to have a very beautiful underwater potential. The life of the marine is still preserved, starting from the coral reefs to the various kinds of marine species can be found in Sekotong Sea.

This was revealed by Fandi, a diver from Gili Gede who already has a-quite-long   experience in diving, especially in Sekotong sea area.

"Maritime tourism in Sekotong is not inferior to other tours in Indonesia," said Fandi, Saturday (31/10).

"We have a lot of giles here, ones of the best spots for diving are Gili Layar and Gili Rengit. Now we also can sell diving spots that are inhabited by mantas (stingrays, red), and that is in the Mekaki Bay. In Bangko-Bangko, we can find hammerhead sharks that are not owned by many other regions," explained by this International Scuba School certified diving instructor.

The underwater beauty of Sekotong sea was also recognized by the Regent of West Lombok H. Fauzan Khalid. According to him, Sekotong's underwater potential is like a paradise that must be enjoyed.

The Regent and the Chief of Police sector of West Lombok AKBP Bagus Satriyo, Dandim 1606/ West Lombok Colonel (Arm) Gunawan, the President director of Municipal Waterworks Lalu Ahmad Zaini and other divers dived in two locations, namely Gili Rengit and Gili Layar. In these two locations, the regent proved that the underwater potential of each dyke has different characteristics.

"Recently we, the regional leadership coordination forum (Forkopimda) did diving. We saw and proved that the corals around the dyke in Sekotong area were really beautiful and extraordinary. We saw the marine life and coral reefs that formed like parks and various types of marine life," said the regent in joy after the Forkopimda's dive, which is part of the series of the preparations for launching #KeSekotongAja on November 6, 2020.

"If you see the beauty of the coral, especially if you can immediately chat with the fish, the fish are not wild, extraordinarily interesting and amazing," he added.

Meanwhile, the Member of Commission II Assembly at regional (DPRD) of West Lombok Abu Bakar Abdullah, who also was there the event hoped that Sekotong could be managed well.

Not only the richness of the sea, he said, if all the potential such as hills, as well as the land with its rich mining products, agricultural products, livestock products, to the seabed with its beauty and the various species in it, if are managed properly, will certainly become a magnet for people to come to West Lombok.

"This is our optimism. This is something that is not impossible, in fact we have a great opportunity to make it happen. I hope that #KeSekotongAja will not only be able to bring in a lot of tourists, but in the future, all of the stakeholders who have an interest in the land of Sekotong,  can work together and then certainly will  advance Sekotong tourism," he said.

Elsewhere, the Head of the West Lombok's Tourism Office, H. Saepul Akhkam, confirmed that the potential of the Sekotong Area's underwater world will be the main material for promotion and tourism attractions in West Lombok.

"Twenty-three gili (small islands, red) are the strength of Sekotong tourism. They will be a loss if all stakeholders do not maintain and make them as attractions. Apart from the surface, the underwater world of Sekotong is not only beautiful and unique, but also presents a sea travel experience that cannot be easy forgotten," Ahkam explained.