A closer insight into ‘Memarek’- a ritual procession in North Lombok 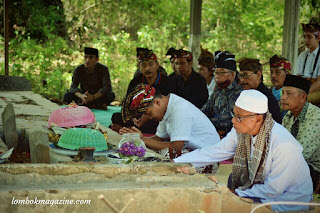 Memarek is an annual ritual to visit the ancestors’ tombs. The word of Memarek is derived from the word Parek/Marek which means visit or pilgrimage. A young cultural practioner in Plawira Village Raden Prawangsa Jaya Ningrat stated Memarek is held as the symbol to stay in touch with the ancestors. He said, in Plawira-Sokong in where he lives, Memarek is held by visiting three tombs of the ancestors. Those are Makam Sokong, Makam Medana, and Makam Segara Katon in North Lombok.

“So this ritual is held once a year,” said Prawangsa after the procession.

In the former of time, he said, Memarek was held twice in a year. The first ritual  was held before the Lowong time, a time which was used to pray for well harvest; while the second ritual was held after the harvest. This second ritual was also called Muleq Kaya, a procession to show the gratitude.

“But in this current of time, we shortened the ritual to become once a year after we found out some obstacles,” he explained.

Before visiting the tombs as the main ritual in Memarek, they need to do 'Maturan' or puting the offerings consisted of betel, flowers and traditional meals in Bale Beleq, a house in which to store the historical things. And then followed by leaving for the tombs which is started by Menyungi, a procession to water the tombstone by using Cereq or a jug.

"So after that, Mangku, the leader, will start the ritual and then followed by Zikir which is done by Kiyai or islamic chaplain," he added.

The ritual procession then proceeded by Begibung or eating together to show gratitude feeling and Menyembeq, a procession to put Bedaq Langeh or a mixture of coconut with turmeric to all visitors' foreheads. This is as a symbol to show the presence towards God. And finally,  followed by Mepamit or leave the tombs.

Besides visiting the ancestors’ tombs, the ritual of Memarek also consists of cleaning the heirloom things in museum which is mentioned before as Bale Beleq.

“Another thing is called Taekang Mangku, it is a process of regenerating the former traditional leader with the new one,” he added.

Memarek also only could be held on the certain days, such as Sunday to Monday or Wednesday to Thrusday. These certain days to hold the procession said Prawangsa, are already used for a long time ago and considered as the good days.

Moreover, by seeing this as the uniqueness of North Lombok, Prawangsa believes that Memarek is potentially to be part of North Lombok's tourism. “However, it only can be considered as premium tourism, since it is only once a year” said he.

To visit North Lombok, the visitors only need to drive two hours from LIA (Lombok International Airport), or 1 hour from Mataram city, the capital of West Nusa Tenggara.